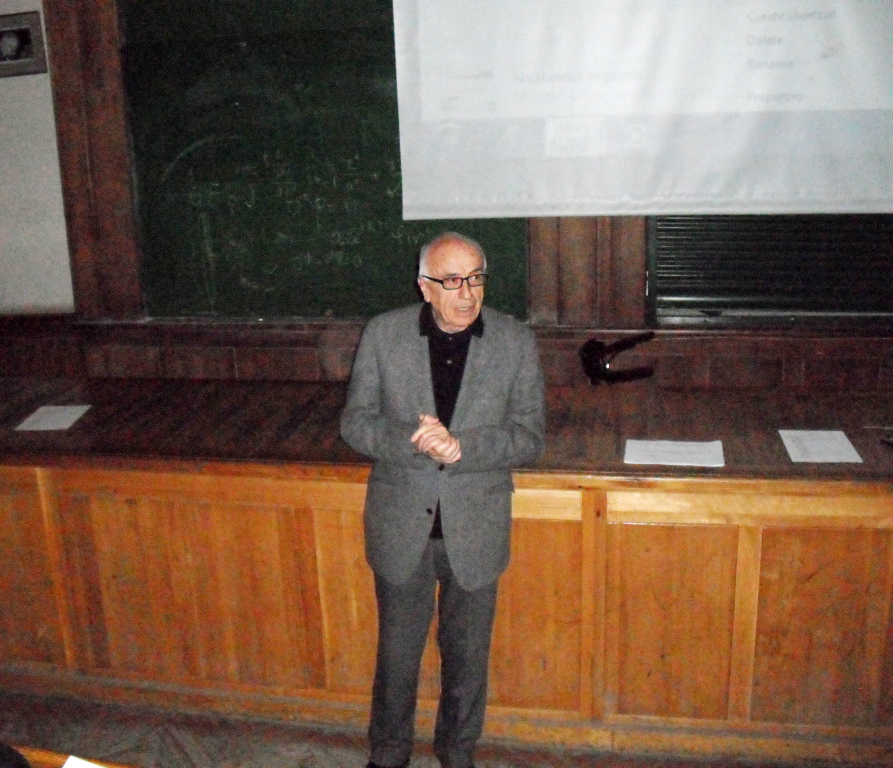 Nodar Kekelidze (1930- 2019) was the famous Georgian Physists, Academician of Georgian National Academy of Sciencrs. Prof. Nodar Kekelidze was the first Georgian scientist who implemented the candidate and doctoral dissertation in the sphere of semiconductor physics and founded the direction of Semiconductor Physics in Georgia.

1985-1988- Head of Laboratory of Semiconductor Materialscience;

In 2019 he was elected an academician of the Georgian National Academy of Sciences (full member of the Academy) in the department of mathematics and physics with a degree in experimental physics.

He was the Fellow of many Academic Councils and the chairman of nanotechnology commission. In 1979, on the initiative of Nodar Kekelidze, the first International Conference on the radiation physics of semiconductors and related materials was held in Tbilisi. The conference was attended by well-known in the world almost all scientists working in the field of radiation physics of semiconductors.

Among the numerous scientific achievements of academician Nodar Kekelidze is the discovery of the phenomenon of two-mode lattice vibrations in InAs-InP solid solutions, which are materials especially important for micro and optoelectronics, including space researches. This discovery revealed the preservation of individuality of the sublattices of InAs და InP in solid solutions (among them radiation individuality). His work, dedicated to this question   (N. Kekelidze, G. Kekelidze, Z. Makharadze. J. Phys. Chem. Solids, v. 34, 2117, 1973), caused a significant international response. The results of marked work of N.Kekelidze were confirmed by the Oxford Claradon Laboratory (R.J.Nicholas et.al. J.Phys.C.: Solid St.Phys., vol.13, pp. 899-910, 1980), at the Saclay Nuclear Research Center (N.Talwar et al. J.Phys.C.: Solid St.Phys., vol.13, рр. 3775-93, 1980), as well as more than 50 works by American, European and Japanese researchers. It should be noted that the work of famous Canadian researchers (D.J. Lockwood at al. J. Appl. Phys. 102, 03351, 2007) is almost entirely devoted to the analysis of N. Kekelidze's article. It should be noted that in the anniversary edition of the Russian Academy (Imperial Academy of Sciences and Arts, Academy of Sciences of the USSR, Russian Academy of Sciences, Triune Academy, to the 290th anniversary of the founding of the Russian Academy of Sciences, Moscow, St. Petersburg, p. 320, 2016) was marked: “N. Kekelidze discovered the phenomenon of two-mode lattice vibrations in effective for micro- and optoelectronics semiconductor solid solutions InP - InAs, which was confirmed at Oxford Clarendon Laboratory”.

Most of the works of academician N. Kekelidze is devoted to the study of radiation phenomena in semiconductors, since one of the significant modern problems are space researches, where semiconductor micro and optoelectronic devices are widely used, among them, in semiconductor photocells for powering spacecraft.

Semiconductor materials and devices are indispensable elements for space, primarily because of their small size, low weight, high efficiency and sensitivity. Unfortunately, these devices are sensitive to radiation, that exists in space. The parameters of the devices deteriorate significantly after irradiation and after prolonged irradiation with large doses they stop functioning, which is connected to the loss of hundreds of millions of dollars. Therefore, such semiconductor materials and the creation of appropriate devices, computer systems and photocells, which must withstand powerful irradiation, are very relevant.

Radiation-resistant semiconductor materials are required for use in nuclear reactors, atomic power stations and accelerators. Particularly stringent requirements emerged after the Chernobyl and Fukushima disasters. It became necessary to create semiconductor materials and manufacture robots on their basis that will withstand high doses of radiation. Unfortunately, this problem has not been resolved today and N. Kekelidze set about solving this problem.

The mentioned issue is also relevant for Georgia since there are about 300 former military bases and facilities of the Soviet Union, some of which are heavily polluted with radiation waste. Unfortunately, several fatal cases occurred in the West Georgia region. It is known that in the armed forces of all countries there is a need to equip with radiation-resistant devices. At the same time, the technologies noted can be a significant source of increase in a country's budget.

Nodar Kekelidze showed for the first time that radiation in InAs crystals creates free electrons under arbitrary conditions i.e. when irradiated by neutrons, ions, electrons (50 Mev, 3 Mev, 7.5 Mev), γ rays in a wide range of doses, at any temperatures and degree of doping (1.1015 -2.1019 cm-3).

Radiation studies of InPxAs1-x   solid solutions, carried out by N. Kekelidze, revealed phenomenon of mutual compensation of radiation donors and acceptors. Based on this phenomenon, an appropriate technology was developed and radiation-resistant electrical, optical, and thermoelectric materials were created, which withstand large fluuences of fast neutrons and high-energy electrons.

The performed works allow creating such devices that will be stable at temperatures above 6500С too. The obtained radiation-resistant samples were successfully demonstrated at International Exhibitions in Poland.

A technology of creating of detectors measuring low concentrations of methane with high accuracy for using coal mining in mines was developed. This technology is still relevant today, because in some countries, China and Ukraine, very often the tragic cases of explosions take places. The technology provides the creation of an effective optical system on the base of InPxAs1-x solid solutions.

Nodar Kekelidze developed the physical basis and created sensors that determine the levels of liquid helium, hydrogen, nitrogen and oxygen. The technology applies specially doped germanium crystals. The sensors were awarded by a large gold medal and a diploma at the Leipzig exhibition. They were also awarded by the highest award of the National Economy of the Soviet Union with an honorary diploma and a silver medal. Sensors were purchased within the “Tokomak” thermonuclear project to accurately capture helium levels in large tanks.

In such a powerful nuclear technology the country as a Soviet Union for the first time Nodar Kekelidze developed, quantitatively justified and applied nuclear transmutation technology for doping semiconductors. This technology makes it possible to obtain highly homogeneous crystals containing precisely defined impurity concentrations. This achievement was noted by one of the prominent scientists in radiation physics of semiconductors, academician Viktor Vavilov, in his monograph (В.С.Вавилов, Действие излучений на полупроводники. Гос.Изд. Физ.мат.литератеры. Москва. 1963).

Nodar Kekelidze with foreign employees developed an innovative technology for modifying the natural zeolites of Georgia and Armenia to improve their adsorption properties. The resulting zeolites were successfully tested at a nuclear power plant for water purification from 90Sr, 60Co, 54Mn and 137Cs- (cesium adsorption reached 100%). The work was performed within the EU grant and the results were published and presented at International Conferences.

Kekelidze and his staff developed an environmentally friendly technology for producing silicon without using silane trichloride. A technology has been developed for producing poly and monocrystals of the “solar” Si quality, by directed crystallization. Silicon photovoltaic cells were obtained, which were successfully demonstrated in the “Delta” Scientific-Technical Center. The proposed technology makes it possible to produce silicon crystals in Georgia, especially since there are unique opportunities in Georgia to produce silicon because of the existence of a rich raw material of quartzite.

N.Kekelidze together with the staff carried out large-scale studies of radionuclides. In this direction, more than 30 papers were published and presented numerous reports in European countries, and a doctoral dissertation was completed. A study was conducted on the activity of radon gas (concentration) in the atmosphere, soil and drinking water in Georgia. The value of radon activity is established and a radon radioactivity map was compiled. Based on the modern methods, radiological risks are assessed (in terms of the occurrence of lung cancer). Studies of the radionuclide composition in the soil and rocks in various regions of eastern Georgia and on the territory of Tbilisi were carried out. It was basically revealed the existence of 22 radionuclides(Th-232family,U-238familiy,U-235 family and other natural radionucdides Be-7, K-40, technical radionuclide Cs-137. The existence of Cs-137 is a particular danger.

In 1961 the founder of modern atomic physics Niels Henrik David Bohr, being in Tbilisi, visited the Laboratory of Semiconductors Physics problem, Ivane Javakhishvili Tbilisi State University, where he was accepted by Nodar Kekelidze.

In recent years, he continued an active and scientifically organizing work. He received 21 international and local grants on the basis of which a unique analytical laboratory was created with modern equipment.

In 1992, after many years’ efforts together with the university administration, N. Kekelidze succeeded in transferring the 8th building to the university and obtaining an appropriate number of staff units and equipment.